Anyone still recalls the criticism Anshu Jain had to face when his German at the Deutsche Bank general meeting was rudimental? Well, let me start by saying that today’s speech by John Cryan was in perfect German.

Before the meeting gets started on the 19-item itinerary for the day, both the Chairman of the Supervisory Board ot Deutsche Bank Achleitner and CEO Cryan have given their opening speeches. As expected, both address the challenges that Deutsche Bank had to face during the last few years – penalty payments and huge payments to settle conflicts outside of a court of law. Consequently, the suggested dividend is 0.19 EUR for 2015 and 2016. But Cryan’s recap of 2016 of course tries to focus on the upside: e.g., Deutsche Bank helped firms raise 480 bn EUR worldwide in 2016. 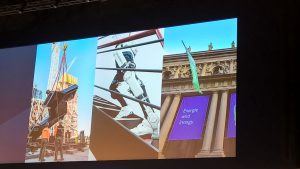 Also, the successes of Deutsche Asset Management are pointed out: 720 bn EUR assets under management, second in Europe for delegated commodity investments.

… and the vision for the future: Digitalization and integrity

But what about the future? Two things stand out: First, digitalization and big data play a more and more important role. Deutsche Bank has bundled its efforts to keep up with the disruptive innovation by founding its own “Digital Factory” – with currently 400 employees in Frankfurt. This division will double its size, the move to Hanauer Landstraße in downtown Frankfurt reflects the growing importance. 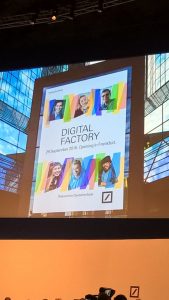 Second, what has become of “Leistung aus Leidenschaft” (performance through passion), Deutsche Bank’s motto? Cryan introduces the new #PositiveImpact social media strategy. Integrity and credibility must become the beacons – and this, says Cryan, is non-negotiable. 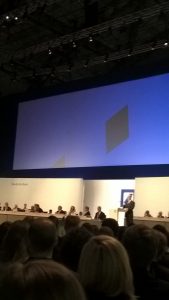 But how will Deutsche Bank make money in the future? Cryan remains a bit vague on that. Digitaliziaton, investment banking business, cost-cutting – I will write more about this later. The goal, however, is clear: a 10% equity return! 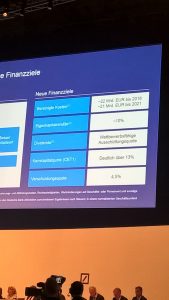