US economist Richard Thaler has been awarded the Nobel prize in economics in 2017. The Royal Swedish Academy stated that Thaler receives the award “for his contributions to behavioral economics”. How does this contribution look?

Beyond the homo oeconomicus

Thaler builds a connection between economics and psychology by challenging the assumption of the homo oeconomicus. This standard assumption states that people behave rationally. When we look at people’s behavior in everyday life, most would agree that that people indeed do not behave rationally. Note that this does not mean that people behave unpredictably – they rather deviate from rational behavior in a systematic way. So, people’s behavior can still be modelled and predicted.

One famous illustration irrational but predictable behavior is “mental accounting”. Put simply, people “label” their wealth according to different accounts – for example, one for food, one for traveling, one for housing, and one for investments. Thaler argues that money in one account cannot perfectly substitute money in another account. So, one dollar is not like the other. A result of mental accounting is that investors are loss averse: if they win a dollar (which they like) and subsequently lose a dollar (which they dislike – more than they like the gain), they are worse off than when they never participated in a gamble. This is because they do not sum up over their “winning” and “losing” account. Figure 1 illustrates this relationship. 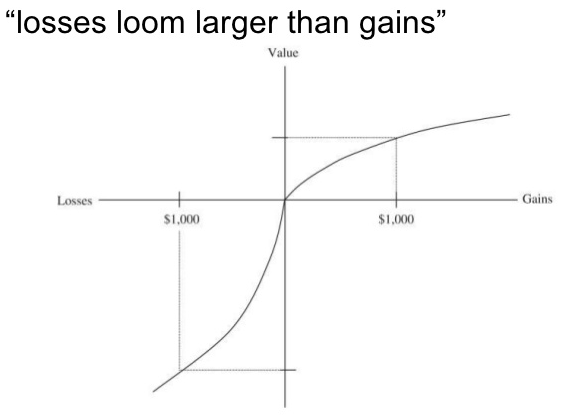 From an investment perspective, the effect causes investors to refuse selling stocks on which they have realized a loss. This is irrational, since past performance does not predict future performance – a past loser stock can easily become a future winner stock.

What are the practical consequences of Thaler’s reseach? Among other things, Thaler has written a popular book on nudging. Nudging is a colloquial term for pushing people towards better choices by making the rationally optimal choice “easier”. One well-known example is to enroll employees in retirement saving plans by default, rather than giving them the option to do enroll actively. Another one? Making the option not to share your data the default in social networks such as Facebook or Instagram.