Market uncertainty and the FED

US interest rates affect financial markets worldwide, and we all eagerly await the Fed’s decision on target rates. The economics textbook predictions predict, and most empirical papers have documented, an inverse relation between equity prices and monetary policy decisions. But what about market uncertainty? Do target rate changes reduce investors’ uncertainty about where the market will be in the future?

VIX as a measure of uncertainty 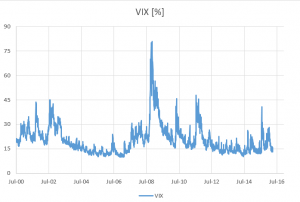 Figure 1 displays a time series of the CBOE Volatility Index (VIX) from mid-2000 to mid-2016. Shortly put, the VIX indicates how volatile investors believe that the S&P 500 will be over the next month. Hence, high values indicate that investors believe that there is a lot of market uncertainty. You can see that uncertainty was extremely high at the beginning of the financial crisis. 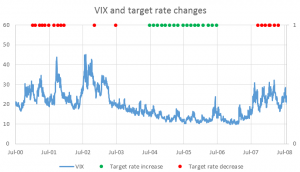 Figure 2 zooms into the VIX from mid-2000 to mid-2008 the target rate was almost constant since then (except for two increases in December 2015 and in December 2016). Since the VIX fluctuates daily, but target rates only change rarely, it is hard to see from Figure 2 whether increases and decreases of the latter affect market uncertainty. I therefore turned to a regression analysis with the VIX as the dependent, and the two dummy variables as the explanatory variables.

Dotting the economic and econometric “i’s”

Economically, the target rate changes should only affect the VIX if it comes as a surprise. We’ll take that as given – I, for one, still feel uncertain about whether Ms. Yellen will increase rates on Wednesday. Econometrically, we need to make sure that the VIX does not exhibit trends, or explodes, in our analysis interval for the regression results to be reliable. To check this, I ran a so-called unit root test (an Augmented Dickey-Fuller test), which in the time interval in Figure 2 came back “negative”.

I ran a multivariate regression of VIX on Target rate increase and Target rate decrease as the explanatory variables, using the time interval from Figure 2.

In summary: If Ms. Yellen increases rates on Wednesday, many investors will sleep better in the upcoming month!